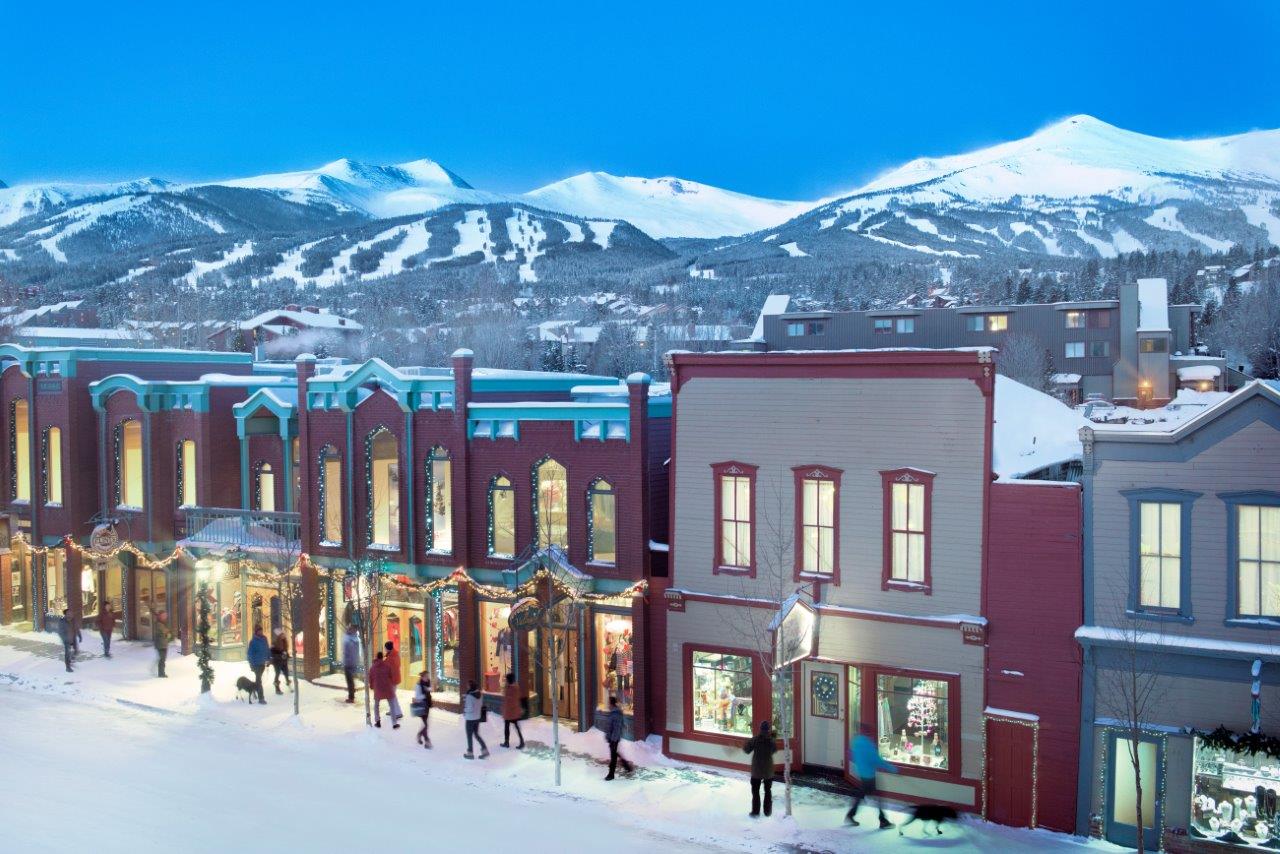 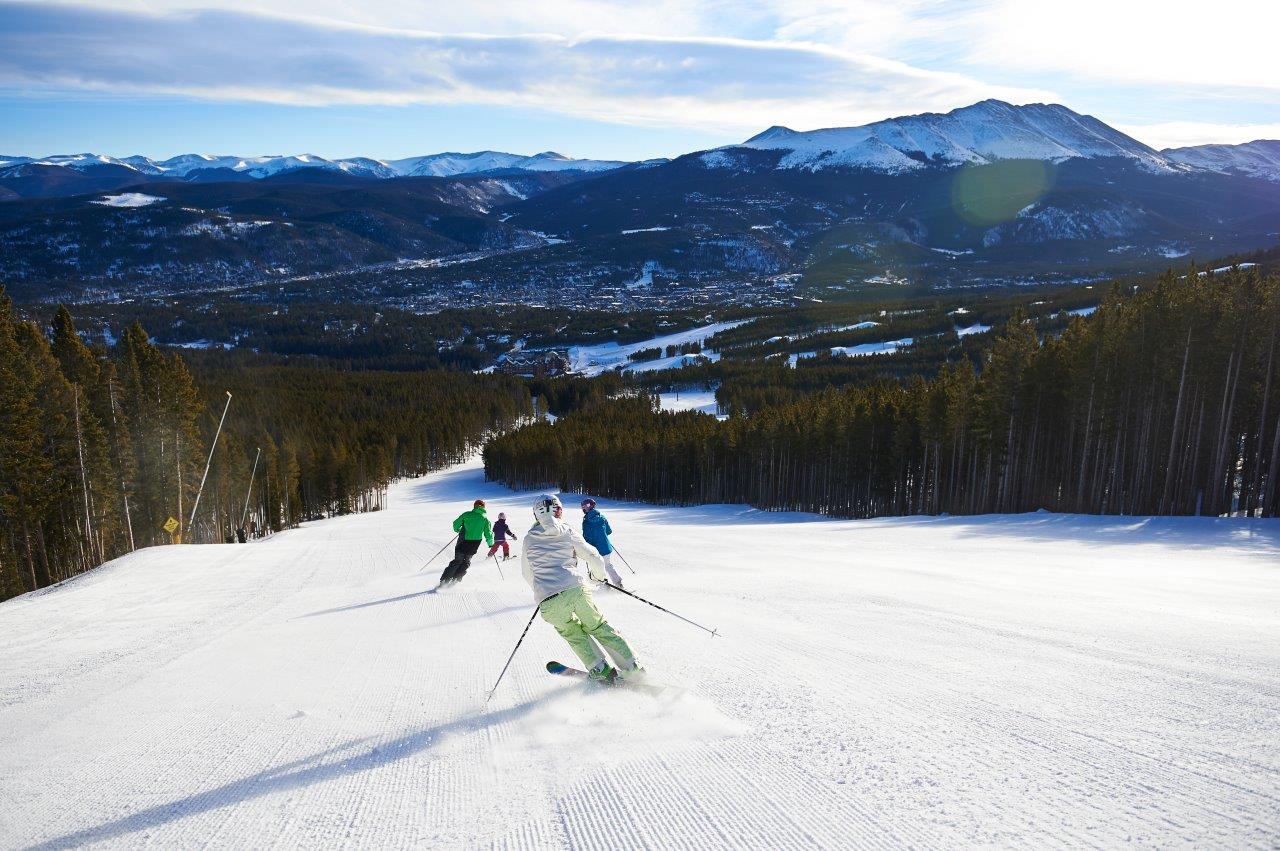 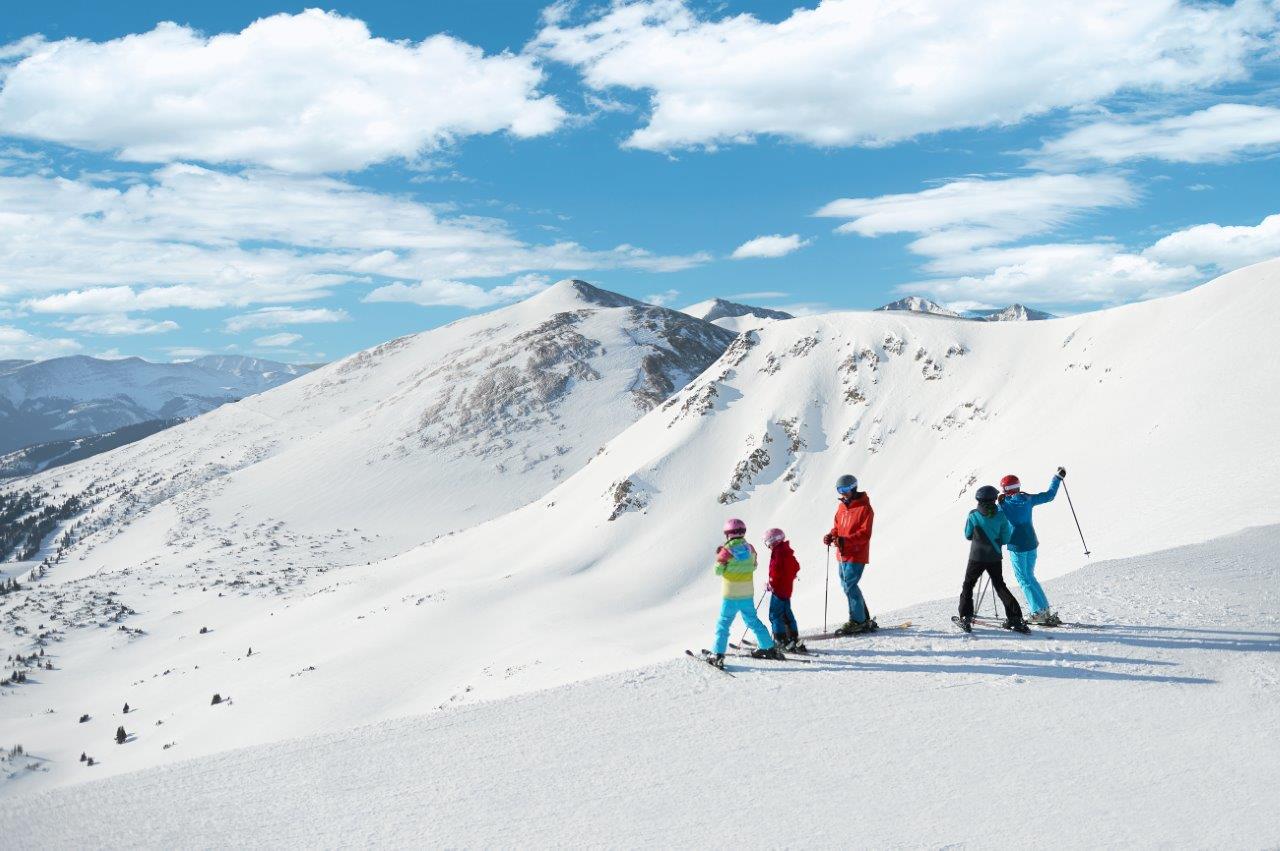 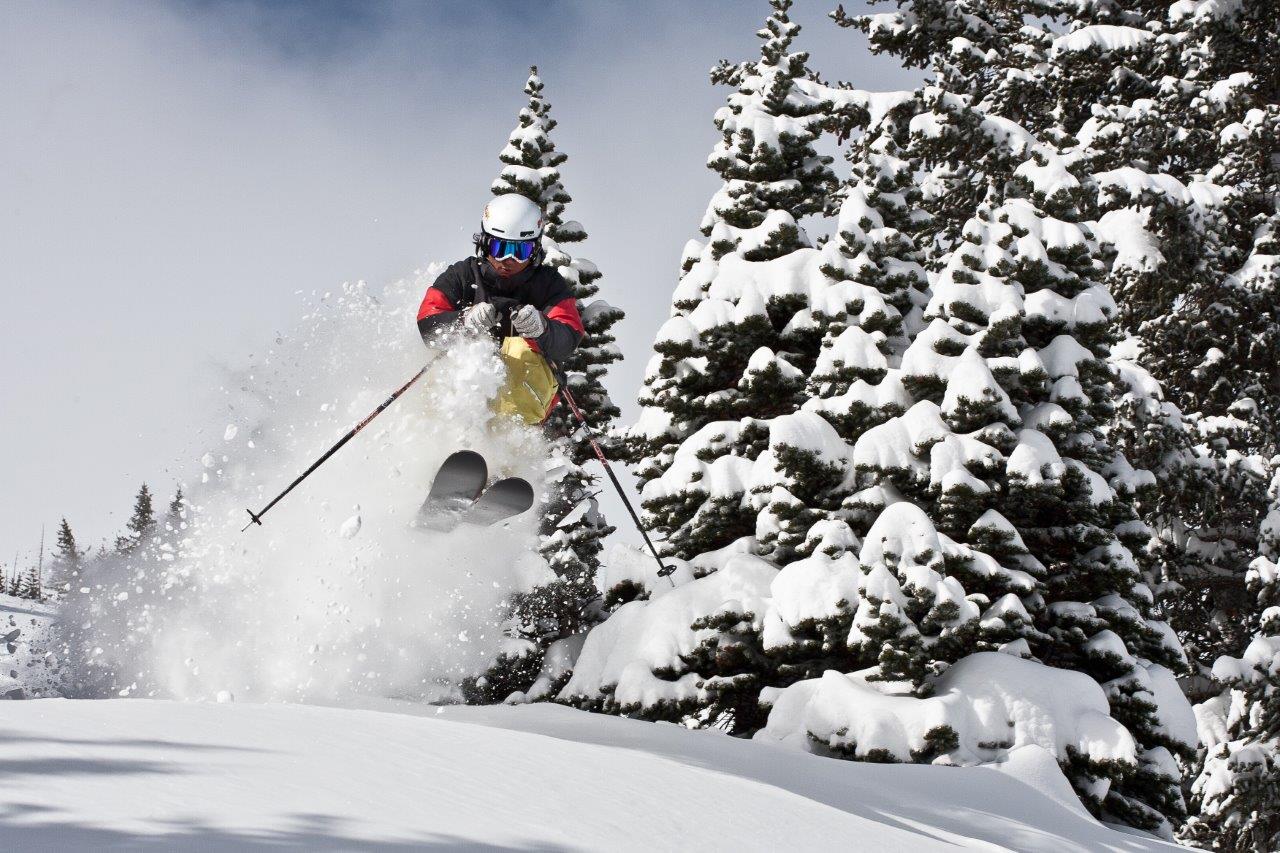 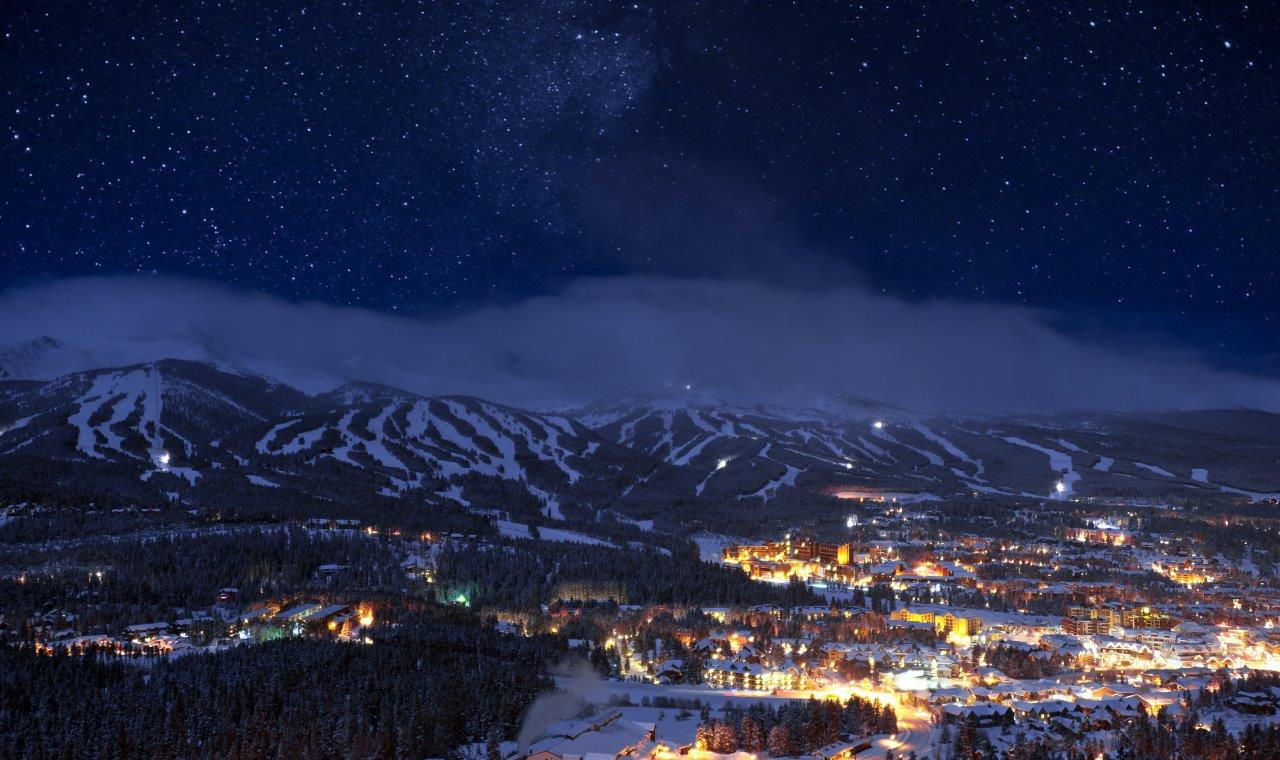 As you drive into Breckenridge you can see a well laid out ski area with peaks 6, 7, 8, 9, and 10 running across and spanning right up into the High Alpine. From town, the snowy fall-line runs that start at the peaks and are cut into the mountain look like some ancient snow god has gone through Breckenridge and removed every tree that was in the way of the perfect run, to create a skiing and riding wonderland.

Breckenridge really does offer something to everyone with over 1,400 skiable acres of impeccably groomed terrain that is a beginner and intermediate’s dream and more recently Breckenridge has successfully expanded it offering by opening up its high alpine terrain area which now constitutes 40% of the total skiable 2,908 acres.

Breck has a vertical drop of 3,398 feet (1,035m) and the elevation summit is a whopping 12,998 feet (3,961m) and an early November to late April season. There are 187 trials of every type of skiing you can imagine, and the longest trail is 4 o’clock, which runs for 3 1/2 miles. There are 35 lifts that service 49,200 people per hour. So there is plenty of lift capacity, but there needs to be because Breckenridge is one of the most popular ski resorts in North America and with good reason, as the skiing and riding it Breckenridge is absolutely world-class. They also have an EpicMix app that gives you real-time lift line status.

The short answer is yes, the longer answer is it is one of the best ski areas for beginners and intermediates in North America which is why it is so popular with families.

Beginners will find plenty of runs to fall in love with on Peaks Eight and Nine. There are plenty of open groomed trails from the top of the chairlifts that feed you back to the bottom of the gently sloping bottom third of the ski hill. The ski areas are incredibly welcoming and forgiving for those that are learning to ski and snowboard and are new to the sport.

What is the Intermediate Terrain and Riding Like at Breckenridge?

Intermediate skiers and snowboarders at Breckenridge Ski Resort will find something special across Peaks 6, 7, 8, and 9. There’s just such a wide array of easy-to-access intermediate terrain and riding from open groomers to fun and challenging terrain and literally everything in between.

The resort and ski area is so well laid out and easily accessible across the lower two-thirds of the resort, it’s hard to go wrong.

Breckenridge Ski Resort has come a long way from opening and only offering Peak 8 in 1961, to now offering over 40% of its terrain in the high alpine. Advanced skiers can warm up just about anywhere and then head higher up into the alpine.

From the top of each peak, there are options to hike higher or drop into steep shoots, bowls, glades and test yourself on black and double black diamond runs off-piste with some super fast groomers on Peak 10 along with some great tree skiing thrown into the mix as well.

For advanced and expert skiers considering a trip to Breck or possibly thinking of a return, you will be thrilled with the high alpine that Breckenridge has recently opened up. Heading into the high alpine of Breck is literally rarefied air meaning you would want to be acclimatized to the area and the surrounding altitude or you do risk altitude sickness. However, if you are ready for the thin air, buckle up and strap on as you will be in for the ride, views, and experience of a lifetime.

Super strong and expert skiers will enjoy a ride up the Imperial Express Super Chair, which takes you to the highest lifted point in North America, and from there you can hike to an eye-watering air gasping altitude of 12,998 feet (3,961m) and drop in a few directions.

If you head over to the far skiers right you will find the Lake Shoots with some of the steepest lines including the unmanned 49° Crazy Ivan. Or you can head to the skiers left from the top of the Imperial Express Super Chair to the Whale’s Tail that links Peak 6 and Peak 7.

It’s a hike to the top and after a single track traverse, any powder hounds will be rewarded with wind-blown light powder snow that’s gathered having been blown in from all sides. The middle of the shoots are your best bet, no matter the conditions for those of you who wish to forgo the Whale’s Tail, double black diamond delights you can make your way all the way across to the top of Peak 7 and drop into the double black diamond Y Shoot area or you can head further right for the to the north side of Peak 7 and ride Whiskey River and The Dunes.

From the Kensho Super Chair, you can drop down straight off the chair or hike to the top of Peak 6 which gives you access to even more high alpine areas to explore. However, be sure to only access the areas by the designated gates to ensure your safety and the safety of others.

Just off the top of the Kensho Super Chair, you’ll discover Breck’s newest addition to the High Alpine and you can find your form on the wide-open blue runs or you can head further left to the Wonderland double blacks. This is our pick for a great place to warm up and familiarize yourself with the terrain, elevation, and conditions and you can build on your adventures from there.

A hike to the top of Peak 6 you can head skiers left to Beyond Bowl and when the wind blows you will be delighted and rewarded to find dry powder stashes well after a storm. Make sure you take the higher route at the bottom of the bowl to avoid having a push with your poles.

Another mind-blowing option off Peak 6 is Serenity Bowl, which is just off skiers right of Peaks 6 after you hike up. But again the terrain here is extreme, so be sure to pick the double black run that your ability can handle and have a ball.

If you hike to the top of Peak 6 and head skiers left and right past Serenity Bowl along the designated route you will be rewarded by locating the hear pumping Six Senses area that’s a thrill-seekers paradise.

It wouldn’t be a roundup of all of the fun high alpine bowl skiing at Breckenridge without mentioning Horseshoe Bowl, which is highly visible, sitting at the top of the prominent T-Bar lift on Peak 8. You can shoot down the middle or take one of the hundreds of other lines scattered throughout and to the sides of the bowl.

Does Breckenridge Have Good Terrain Parks?

There are four award-winning terrain parks to choose from at Breckenridge.

The most famous of the resort’s terrain parks is known as the Freeway. It’s an expert-level park and features one of North America’s largest triple jump lines plus a collection of rail and jib features. One of the highlights of Freeway is the superpipe featuring 18 foot high walls and is considered by many in the industry to be the best halfpipe in the world. You can access the park by following Breckenridge’s Four O’clock run to the top of the Freeway trial.

Park Lane is the local’s Park with 3,500 feet of jumps along two jump lines and enough rails and boxes to keep you entertained all day. To access Park Lane take chair five.

Frontier on Peak 9 is a small park similar to Bonanza. Frontier has a combination of moderate jumps and boxes to help you get going or improve your skills. There are also two entry-level terrain parks Trygraves and Eldorado respectively located near the base of Peaks 8 and 9 both feature smaller rails and jump features as well as entry-level half pipe.