Red Mountain resort is far from the madding crowd, nestled amid wilderness deep in the Kootenay region of southern British Columbia with the lively and authentic Canadian mountain town of Rossland on its doorstep.

Made up of three neighboring peaks – Red, Granite (the largest), and Grey mountains, Red is one of Canada’s larger ski areas. The slopes offer 2,920 feet (890m) vertical and are blessed by over 24 feet (7.5m) of snowfall each season. So challenging is Red’s advanced inbounds terrain that The Canadian Open Freeride Championships are held here every year.

Skiing was introduced to the area by Scandinavians lured to the region by the 1890s gold rush, the temptation to discover their new mountain surrounds as strong as the hankering for the riches below them.

By the mid-1890s Rossland Ski Club had been formed, and in 1897 it made history by holding Canada’s inaugural officially recorded ski competition. By the 1930s  the group had morphed into the Trail-Rossland Ski Club thanks to the growing band of ski tourers establishing even more routes into the ranges via logging and mining roads, and a gas rope tow was installed at the base of Red Mountain.

Two decades on, the newly formed Red Mountain Ski Club replaced the rope tow with a chairlift and built a substantial lodge which still serves as the resort’s main base area facility today.

Unique for features such as inbound cliff drops and short sharp sections of precipitous terrain, Red Mountain was recognized early on as ideal for training talented young skiers in the finer techniques of extreme skiing. The development of Granite Mountain allowed Red Mountain to host Canada’s first World Cup.

Visitors stay either in the modern lodging at Red’s base or a mile (two kilometers) down the road in Rossland, a town that has retained its genuine old-world charm and embraced true mountain culture.

Funky and laid back, in Rossland it is easy to find anything from excellent food and coffee to top-notch ski or snowboarding gear. 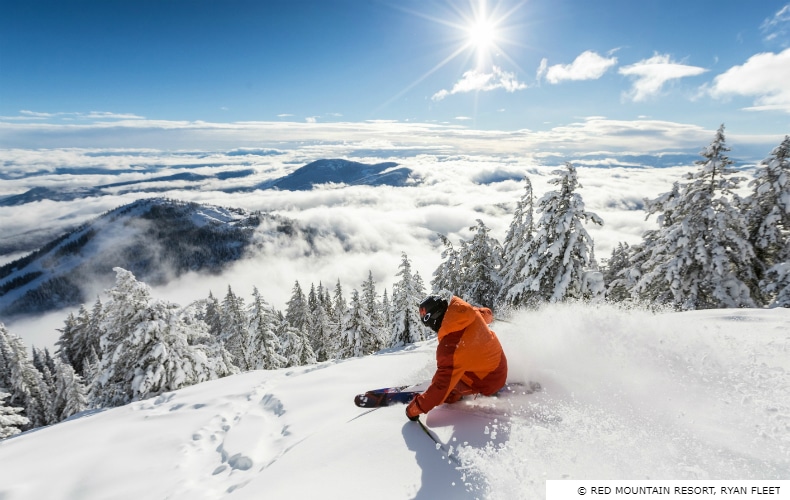