An intermediate paradise with some of Europe’s longest descents, Paradiski ranks up there with the world’s largest ski areas, coming in third after The Three Valleys and Espace Killy (Val d’Isere/Tignes). All are located in the Tarentaise Valley, making it the only place on the globe with such a high concentration of world class ski resorts – plus day trips are possible between all three major areas.

Paradiski links La Plagne, Les Arcs and Peisey-Vallandry via 425 km / 265 miles of piste accessed by 160 lifts ranging across stunning peaks, ridges, valleys and two glaciers. About 70 per cent of terrain is above 2000 metres / 6500 feet resulting in good to great snow conditions throughout the season which here generally starts in mid-December and runs to early April.

As the name suggests the area is very much a skier’s paradise – a largely intermediate playground with spectacular views, long wide gentle runs, and many restaurants with glorious sundecks on which to spend some time basking after an authentic home-style cooked lunch. Paradiski is renowned as a one of the Alp’s best family ski destinations as well as a good place for mixed ability groups. The terrain split is 152 green/blue (beginner) runs, 79 red (intermediate) runs, and 22 black (expert) runs. 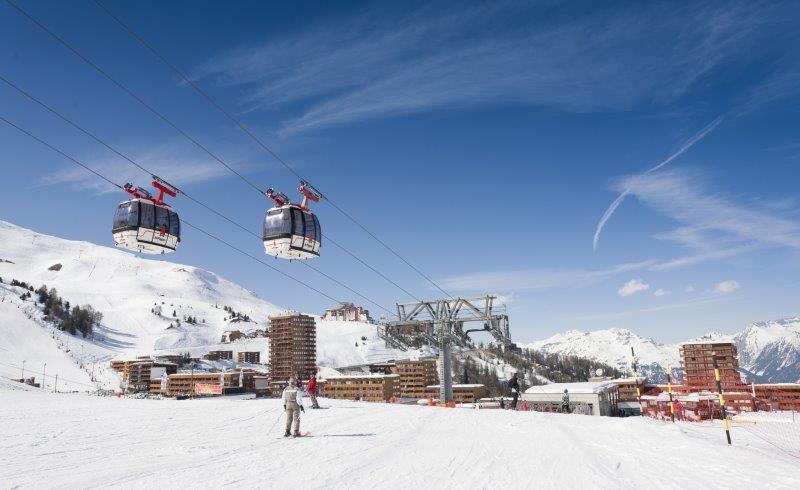 Paradiski also offers some of the longest lift-accessed descents in the Alps, many 1000 metres / 1200 feet -plus so whether you like skiing on or off-piste, this region is ideal for those who love covering as much ground as possible during their ski holiday, clocking up the miles and becoming a better skier in the process.

Anchoring the region’s lifting system is the Vanoise Express, the major cable-car linking Les Arcs and La Plagne. It is considered a marvel of engineering and still holds the title of world’s largest cable-car. The double-decker carries up to 200 people across 1800 metres / 5900 feet one way in 4 minutes, and has the capacity to move 200 people per hour.

We also like this area because, as goes for its famous neighbours, getting there is virtually seamless, fast and efficient. The most popular choice is to fly into Geneva (as it’s the largest nearby airport) from where it takes about two and half hour to reach your accommodation in either La Plagne or Les Arcs. Travel time is about the same from Grenoble or Lyon, and while it takes about one hour 45 minutes to transfer from Chambery Airport it is a much smaller hub.

Novices will think this place has been designed just for them. Step outside your door to access 225km / 140 miles of largely blue, beautifully groomed, wide sunny slopes with the kind of gentle pitch loved by families and anyone looking for cruise-y slopes. There are still enough black and red runs to satisfy the more advanced (although the expert runs are largely concentrated around Les Arc) as well as off-piste and access to the longer descents of Paradiski.

There are 11 villages throughout La Plagne, all self-contained mini resorts in themselves. Some are long-established rustic alpine settlements while others are purpose-built for the ski resort.  Plagne Centre was the first of the purpose-built villages and still the traditional focal point for shopping, restaurants and apres ski featuring indoor malls and easy access to the slopes.  Along with Belle Plagne the two are considered the main hubs of La Plagne. The other nearby purpose-built villages are Plagne 1800, and above, Plagne Aime 2000, Plagne Soleil and Plagne Village. Plagne Bellecôte and Belle Plagne. Les Coches is modern but was built to look rustic. The traditional farming villages which are also an option for accommodation are Champagny en Vanoise to the south of La Plagne, Plagne Montalbert to the west and Montchavin La Plagne in the north.

A popular off-snow facility in La Plagne is The Magic Pool at Belle Plagne. This is an “aqua-leisure” centre with an outdoor heated pool and spectacular views located in the middle of the resort. The facility also offers a Nordic outdoor area which includes a spa and two saunas, and there are aqua biking and aquafitness classes just in case you didn’t get enough of a workout on the slopes.

Another popular apres activity, especially for families and groups, is the 1500 metre / 4920 foot-long bobsleigh track. This comes courtesy of the Olympic Games in Albertville, and the legacy is now one of the resort’s biggest off-snow attractions. There are 3 ways to get down: in groups of four on the 4 man self-braking and driving bob-raft; as a single, laying down feet first on the speed luge (surrounded by a protective cage unlike an Olympic athlete however- phew); a single seater speed luge laying down on your front (eek!) or driven by a professional pilot as done in bob racing (I know which I would choose!). Be prepared to reach speeds of 120 km/hr.

As you would expect there is plenty of choice for eating out at night in La Plagne and most of it is family-friendly. Belle Plagne is the liveliest of the villages for apres ski. If self-catering there are several mini-supermarkets and also a mountain food and drink delivery service called Huski.  On- mountain the better establishments are located away from the central areas. One such place is Les Chalet des Verdons Sud located above Champagny, a charming traditional wooden chalet where you can treat yourself to a genuine alpine experience eating traditional cuisine in front of a log fire. At the opposite end of the scale but still with good food is L’Absinthe, a fast-food eatery serving Savoyard fare such as crepes and salads which can be enjoyed on the sunny terrace.

Slopes are so varied and numerous here skiers will feel spoilt for choice. Variety is huge. There are plenty of high snow-sure slopes to make the most of on sunny days plus enough forest and tree runs for a satisfying ski day when the weather socks in. Lifts are fast and modern, mostly chairlifts and gondolas, and in fact you would have to search for T-bars here. 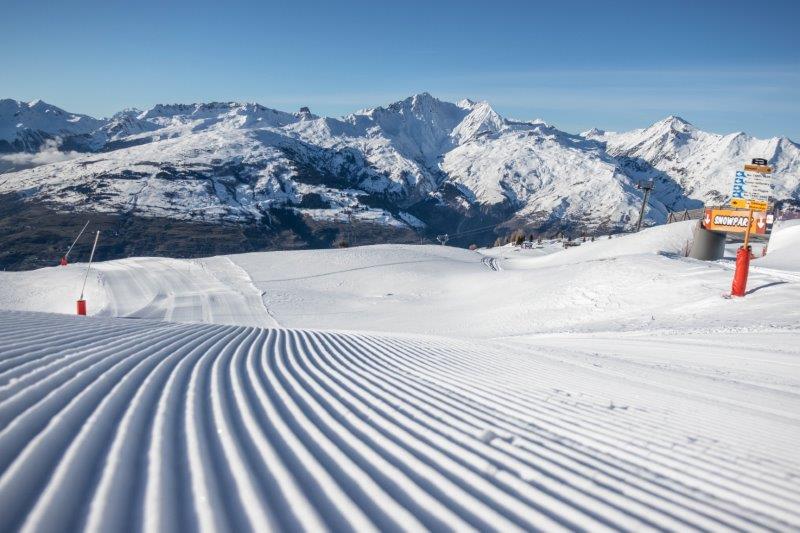 Among Les Arc’s 200km / 125 miles of runs, there are plenty of steep fall lines and long descents of the kind that make skiing in Europe so attractive. On powder days we like to head to the open slopes around the Varet gondola and Aiguille Rouge cable car as they offer some of the region’s best off-piste. Many of Les Arcs runs are over that magical 2000 metre mark which means snow quality here is almost always good to excellent. What’s more the scenery is to die for, with views from the valley across to La Rosiere and beyond to Mont Blanc quite spellbinding. Thankfully, to keep everyone happy, the high-quality expert skiing Les Arcs offers is matched by an abundance of cruising slopes, and there are many dedicated beginner areas as well. Those with little ones should note the Milles 8 area above Arc 1800 has a fun children’s ski slope and a toboggan run floodlit in the early evening.

Like La Plagne, Les Arcs is actually a number of villages. They are all ski-in ski-out and it is also easy to ski between them – all of which is handy should you not want to spend the full day skiing or when you forget something and have to zip back to your lodging. Arcs 1600 was the first purpose-built village, its large apartment blocks constructed in the 1960s and 70s. The traffic-free resort lies atop the funicular train which emanates from Bourg St Maurice. Arcs 1800 is the largest and spread out a bit more than the others with some of its apartment blocks built up the hillside. There is also Arc 2000, connected to the attractive Intrawest-built Arc 1950 just below by a short gondola which runs late into the night. All villages have a more than decent selection of restaurants and bars, with Arc 1600, 1950 and 2000 the most popular with families.

Plan Peisey and Vallandry are villages of modern chalets built in the Alps’ traditional style dotted with a small number of bars, restaurants and shops. They are linked to the historic mountain village of Peisey below by a small gondola.

As we mentioned, Paradiski has plenty in the way of spots with good food and sunny terraces for basking after a morning ski and lovely lunch. In Les Arcs one of the most popular is Le Bulle Café located near the Arcbulle chairlift base above Arc 2000. While the menu is more general than strictly European fare, you can enjoy hearty pizzas and even sea food pizzas either inside or out on the huge terrace where there is often live music. The Lodge is a more upscale on-mountain restaurant, located at the top of the Mille 8 area above Arc 1800, with French cuisine and a two-tiered outside terrace. At the end of the day head for the igloo village built each season above Arc 2000. Order a drink at the ice bar and wander through the ice grotto marvelling at the ice sculptures. In the villages, bars take it in turns to organise nightly entertainment, while among the livelier establishments is George’s wine bar and the British pub-style Les Belles Pintes, both in Les Pintes.

About The Author: Bronwen Gora is a travel writer, features editor of Australia’s largest ski magazine Snow Action and fanatical skier who has dedicated almost every trip over the past 25 years to exploring the world’s ski resorts, visiting well over 100 mountain destinations in the process.