Park City Or Steamboat – Which US Olympic Ski Town Is Best?

Which US Olympic Ski Town Is Best – Park City Or Steamboat?

There are two main US Olympic Ski towns, but which one is the best?

The Park City area, which held freestyle, alpine, cross-country skiing and snowboarding, and bobsleigh and skeleton at the Utah Olympic Park as part of the Salt Lake 2002 Winter Olympics, should be the clear favorite to be crowned the US’s best Olympic ski town. However, Steamboat Springs has produced more Winter Olympians than any other town in North America, with 98. So, in a battle between the two, Park City and Steamboat Springs who takes the gold medal as the best US Winter Olympic ski town?

The town of Park City lies nestled between two famous ski areas and one newcomer on its doorstep. From the town of Park City, you can easily access Park City Mountain Resort and swanky Deer Valley Resort. Plus, a short 10 mile/15-minute drive, you will find yourself at the action-packed Woodward Park City.

In terms of Olympic things to do when you visit Park City, one of the best ways to rekindle the Olympic experience is to visit Utah Olympic Park, an 8 mile / 15-minute car ride away. If you like speed, you can ride the Comet Bobsled down the 2002 Olympic Sliding Track at speeds of more than 60 miles an hour. No need to worry because an experienced pilot drives the bobsled.

Other winter activities at Utah Olympic Park include Extreme Tubing, where guests ten years and older can slide down the Nordic large hill (K64) as well as three small hills (K10/20/40) for ages five and older. Other activities include Extreme Zip, Canyon and Summit Ropes Courses, and the Drop Tower Challenge. There are also two museums to check out—the Alf Engen Ski Museum and the Eccles Salt Lake 2002 Winter Games Museum.

If you happen to visit Park City in the summer, the bobsled runs on wheels down a concrete track, and there’s an adventure course, alpine slide, summer tubing. For kids older than 7, you can ski jump with a Freestyle Signature Session that includes trampoline skills, mini-ramp and single ramp where you land in a pool, subject to your coaches ok.

Sitting proudly on five acres in Park City, the 85,000-square-foot USANA Center of Excellence trains and supports Olympic and aspiring athletes with state-of-the-art facilities, including strength-training areas, a gymnasium, ski and snowboarding ramps, trampolines, a nutrition center, and recovery/rehabilitation facilities. Plus, there are educational areas for athletes, coaches, and a full sports science lab. 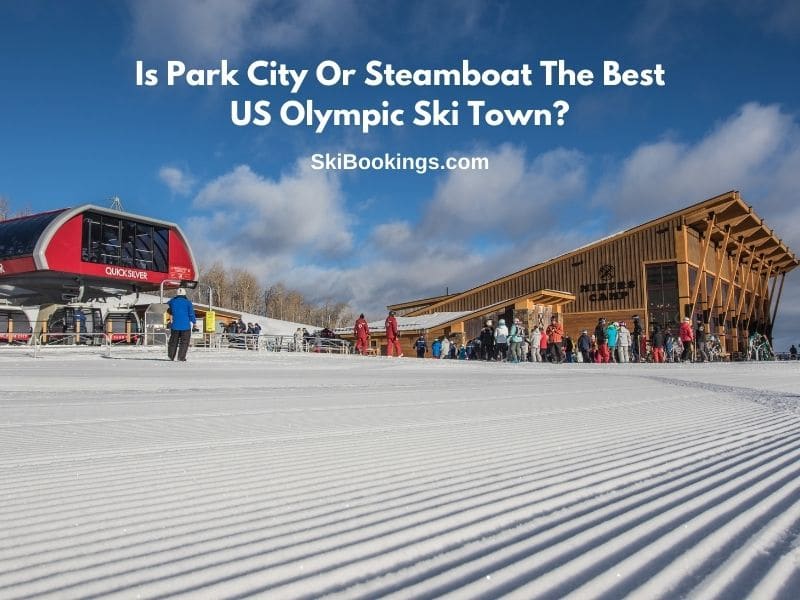 What about the skiing and riding at Park City?

Park City Mountain Resort is a big favorite for skiers and boards because it offers every type of terrain you can imagine across its 7,300 acres. With 348 named trails, 41 lifts, 13 bowls, 8 terrain parks, 1 half pipe, 1 mini pipe, you can ride, cruise, bump, jump, and everything in between. The base elevation of 6,800 feet climbing to a summit elevation of 10,026 creates a very respectable 3,226 vertical drop so you can build up as much or as little speed as you like, plus Park City receives an impressive 355 inches of powder snow on average each season.

Whereas Deer Valley remains exclusively for skiers because snowboarded are not allowed at the resort. Deer Valley hosted the alpine slalom, freestyle moguls, and aerial ski events of the 2002 Winter Olympics and obviously no snowboarding events.

Just up the road, you have the choice of a couple of canyons and visiting the world-famous Cottonwood Canyons resorts of Alta Ski Area, Brighton Ski Resort, Snowbird, and Solitude Mountain Resort.

Further afield is the Robert Redford-built Sundance Resort with its cozy uniqueness that mixes skiing with the arts.

There must be something in the water because Steamboat continues to produce more Olympic athletes that live or have trained in town, with a current total of 98, more than any other ski town in North America. The town builds on its 80-year Olympic tradition, where one out of 136 individuals is an Olympian. This means when you visit Steamboat, you may unsuspectingly ride the chairlift or buy your coffee or dine a few feet away from an Olympian.

Steamboat is known as Ski Town USA and has many natural gifts that make it such an Olympic town powerhouse. Firstly, Howelsen Hill was named after famed Norwegian Carl Howelsen, who showed the locals back in the 1900’s you could ski for work and fun. The hill in the main town is perfectly suited to ski jumping and is the largest and most complete natural ski jumping complex in North America. 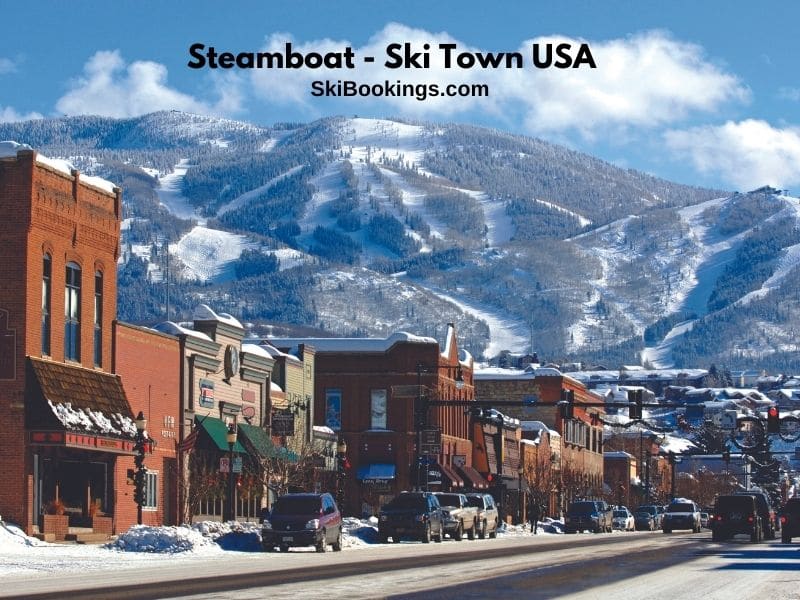 What About The Skiing And Snowboarding At Steamboat?

The skiing and snowboarding at Steamboat is world-class across its 2,965 acres, 18 lifts, and 169 trails. Steamboat is a complete mountain range of Mount Werner, Sunshine Peak, Storm Peak, Thunderhead Peak, Pioneer Ridge, and Christie Peak.

One of the most welcoming features of ski and snowboarding vacation to Steamboat is ‘the Colorado friendly’ base elevation of 6,900 feet (2,103 m) and a peak elevation of 10,568 feet (3,224 m) that creates a thrilling vertical drop of 3,668 feet (1118 m). The lower elevation, in Colorado terms, really does help visitors more quickly acclimatize, especially if you are visiting from sea level.

The skiing and riding at Steamboat is as spectacular as their Olympic heritage. Steamboat coined the phrase Champagne Powder in the early 1950s when local Joe McElroy said the snow tickled his nose like champagne thanks to Steamboat’s unique 6 percent water content.

When you combine fantastic skiing with their unique terrain with most of the treed areas on the hill skiable with a mix of aspens and pines, one of the most fun areas to head to on a powder day is Morningside Park.

And The Winner Of The Best US Olympic Ski Town Is…

Both Park City and Steamboat are rich in Olympic history, and both offer fantastic skiing, riding, and vacation experiences. However, we have to give it to the clear winner Park City as there are way more Olympic fun things and options for you to enjoy. Congratulations to Park City Mountain Resort, the best US Olympic Ski Town.